The Buffalo News: ''The Police's reunion tour shows the trio still has what it takes...'' 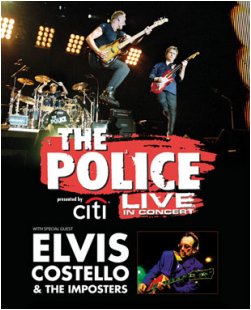 The Police's reunion tour shows the trio still has what it takes...

Nostalgia is one thing. Rediscovering something from your distant past in real-time is another.

On Saturday, the Police played Buffalo for the first time since 1985. The crowd, and the band, may have aged, but the song remains the same. And it's still a song worth hearing.

Because the Police broke up at the top of their collective game, the band has nothing to be embarrassed about. All three original members have gone on since 1985 to create significant music that covers the ground between pop, jazz, rock, minimalism, avant-garde and what we'll call, for lack of a better term, "world music."

All of this solo work - Sting's, Stewart's and Andy's - has had an effect on the new Police. The level of musicianship was high, and the band interplay more inspired than one might've expected, throughout Saturday's HSBC Arena gig.

The Police proved to be, with the exception of U2 and Rush, the most intelligent and consistently excellent rock band of the '80s.

This reunion tour is said to be simply a celebration of past glories. But throughout Saturday's show, the Police exploited the brilliance of the trio's original compositions in a manner that suggested these three still have plenty to say in the present tense.

Opening with a reimagined version of 'Bring On the Night' - with Sting on finger-picked acoustic guitar - the band proceeded to give us a healthy dose of its collective pop perfection, and more than enough side ventures to satisfy the true aficionado.

'Demolition Man' married fusion to pop and rock; 'Walking on the Moon' fused reggae and jazz chord voicings; 'Synchronicity II' was progressive rock minus the pomposity, and made it more than plain that these three men had come to do some serious playing.

Sting, in full beard and taut biceps, was in fine voice throughout. More significantly, maybe, he played some serious bass, and when the trio moved into the extended Andy Summers solo section of 'Voices Inside My Head/When the World Is Running Down', the interplay between Sting, drummer Stewart Copeland and Summers was sublime.

It must be mentioned that Copeland is the finest rock drummer of his generation, and further, that he is better now than he ever was.

It should also be noted that Summers' extended improvisation during 'When the World Is Running Down' was nothing but brilliant, a clear reminder of his ability to blend jazz harmony with rock.

All of this would've been enough even without a torrid opening set from Elvis Costello and the Imposters. That band might've stolen the show, had not a trio as hot as the Police followed.

Happily, Costello and his cohorts - drummer Pete Thomas, keyboardist Steve Nieve and bassist/harmony vocalist Davey Faragher - offered a serious dose of 'Momofuku', the album released (on vinyl only) last week. The new material simply kicked butt, and Costello fearlessly opened with a tune from it, the bluesy 'Stella Hurt'.

There were the hits, of course, in the form of 'Watching the Detectives', 'Allison', 'Every Day I Write the Book' and the slightly more obscure 'I Don't Want To Go To Chelsea', to satisfy the crowd, which accorded Costello and company a warm reception.

This was a truly wonderful show.

So, Sting... how about a new Police album?

May 2, 2008
The Ottawa Sun: ''Arresting Performance - Police and Elvis Costello deliver stellar performances before packed house at The Bank...''

Before a packed house, The Police took the stage amid a mass of Summers' guitar feedback and Copeland's frantic high-hat flutters, lapsing into the sweet nylon-string strains of 'Bring On the Night'. And with that, the 31-year Police drought in Ottawa was over...