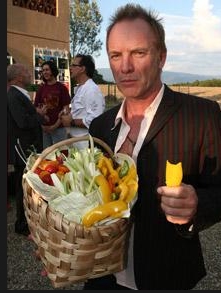 The rock star Sting and his wife Trudie Styler have opened a farm shop selling the organic olive oil, wine and salami he produces on his estate in Tuscany.

The singer and musician, the most famous resident of the region of Tuscany nicknamed 'Chiantishire', has been producing organic food on his 900 acre estate for years, selling it directly to outlets in the United States and Britain, including Harrods.

But this is the first time that fans will be able to turn up at the Italian farm gate of 'Il Palagio', as the estate is known, and buy his oil, wine, acacia honey and speciality salami, made from a local breed of pig.

The farm shop was unveiled in front of neighbours, villagers and the mayor of the nearest town, Figline Valdarno.

Sting, 58, told journalists that he believed there was a close "rapport" between good food and good music. "If I don't eat well, I can't sing," he told Corriere della Sera newspaper.

His wife told guests that the couple had always been impressed by the warm welcome they had received in the area, and by the strength of local culinary traditions.

Around 15 people work on the estate, bought by Sting in 1997, which lies south-east of Florence.

© The Daily Telegraph by Nick Squires

Aug 2, 2010
It's summer, Sting is performing in Canada, which can only mean that Überfan Roger Puplett is on his adventures again...

"I had a dream last night..." It was a glorious summer's day, beautifully hot; I was strolling along the banks of the river Thames, lost in my thoughts. I was wandering off the path slightly, my mind was soon drifting to more immediate geographical decision making concerns, how do I get to Hyde Park from here? I'd already had my caffeine fix in Covent Garden and had earlier in the day visited St Pauls Cathedral.