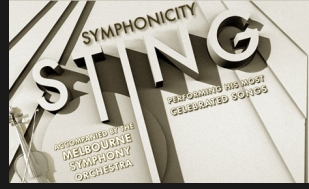 Sting and the Melbourne Symphony Orchestra...

Sting is a more sophisticated lyricist than most but he still knows the best pop songs are about pure emotion. So when orchestral arrangements add a further layer of sophistication, there's always the danger of gilding those Fields of Gold.

The last time I heard Sting in Perth, he was performing the songs of 16th-century composer John Dowland with Bosnian lutenist Edin Karamazov and a small chamber choir. On that occasion, less was more.

This time round Sting was kicking off his Symphonicity national tour in Perth by performing his best-known songs with the Melbourne Symphony Orchestra, Adelaide jazz singer Jo Lawry and a band including guitarist Dominic Miller, bassist Ira Coleman and percussionists Rhani Krija and David Cossin.

On this occasion, more was definitely more.

For "Symphonicity" read "The Sting Songbook". These are less classical than classic arrangements in the tradition of Nelson Riddle et al, with expert arrangers such as Rob Mathes, David Hartley and Michel Legrand skilfully complementing Sting's original material without ever once compromising its purity.

The result was a wonderful evening's entertainment, with the 12,000-strong audience lapping up every minute of the nearly two-and-a-half hour concert as the outrageously fit 59-year-old Sting pumped out hit after hit while the equally athletic conductor Steven Mercurio elicited electrifying performances from the MSO.

After opening with 'If I Ever Lose My Faith In You', Sting moved through such classics as 'Every Little Thing She Does Is Magic', 'Englishman in New York', 'Roxanne' and 'Fields of Gold'.

The second set featured Hartley's great arrangement of 'A Thousand Years', the melodramatic 'Moon Over Bourbon Street', 'King of Pain' and 'Every Breath You Take'.

Most impressive, however, was 'Russians', in a glorious symphonic arrangement by Vince Mendoza; Miller and Sting's 'Shape of my Heart', in which Miller showed off his refined classical guitar playing; and 'Whenever I Say Your Name', with Wilma Smith's violin virtuosity equalled only by Lawry's sexy, soulful singing.

An energetic 'Desert Rose' ushered in an encore set with a moving rendition of 'Fragile', dedicated to the victims of the floods in Queensland and Victoria, and 'Message in a Bottle', where Sting eschewed any accompaniment save his own guitar.

It was as close to a religious experience as I've come in a long time.

The outrageously fit 59-year-old pumped out hit after hit and there were electrifying performances from the MSO.

© The West Australian by William Yeoman

Jan 22, 2011
For Adelaide singer, a Sting in the tale - Jo Lawry always loved Sting's songs, and now she sings them with him... reports The Advertiser...

For Adelaide singer, a Sting in the tale...