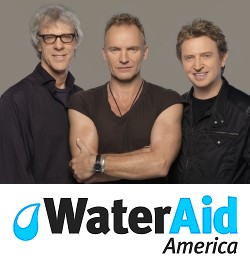 Today WaterAid announced that a special benefit ticket auction for VIP ticket packages to concerts on the North American leg of The Police's world tour will be held on the non-profit auction web site Mission Fish beginning this week. The proceeds from this auction will benefit WaterAid, a non-profit organization whose mission is to overcome poverty by working with people in the world's poorest countries to improve access to safe water, sanitation and hygiene education.

This week, two front-row-center VIP seats for upcoming The Police concerts will be auctioned on Mission Fish's website at: http://www.missionfish.org/NPMMF/nphomepage.jsp?NP_ID=17803.

In addition to the best seats at each venue, the highest bidders will receive a VIP package including pre-show hospitality, an autographed tour program, parking and, at select venues, admittance to a sound check party.

On February 12, 2007, The Police announced that they would contribute a portion of the proceeds from their highly anticipated worldwide tour to WaterAid. In a statement, The Police said, "We are proud to support WaterAid in their mission to improve access to safe water, sanitation, and hygiene education in the world's poorest countries. We hope the funds and awareness raised during the tour will help to shine a light on WaterAid's efforts to bring help to millions of people in need."

To participate in the auction, fans of The Police should CLICK HERE.

About WaterAid: WaterAid is the world's leading independent non-profit organization dedicated exclusively to working with people in the world's poorest countries to improve access to safe water, sanitation and hygiene education. Founded in 1981, it operates in 17 countries throughout Africa, Asia and the Pacific region and has helped more than 11 million people gain access to safe water through low-cost, sustainable projects that can be locally managed and maintained. With a goal of expanding operations to assist 1.3 million people to gain access to safe water and 1.5 million people to gain sanitation this fiscal year, it has earned a worldwide reputation for its effectiveness and leadership and garnered numerous national and international awards, including the prestigious Stockholm Water Prize.

The itinerary for The Police World Tour has been extended beyond its original finish date to enable disappointed ticketholders to attend previously postponed shows. Ticket holders for the Mannheim show should retain their tickets which are now valid for a show on 5th June 2008, the Dusseldorf show will now be performed on 8th June 2008. Tickets from Manchester (October 15th) are now valid for 17th June 2008, and Manchester (October 16th) are valid for 18th June. Refunds are also available and ticket holders can contact their point of purchase...

Oct 21, 2007
Sting holds book signing at Harrods...
Sting held a booksigning for his new book LYRICS at Waterstone's at Harrods on Saturday 20 October. This was his only UK signing. See some images from the signing here...
Read more
+